Fade to Black
It’s Better to Die Standing Than to Live on Your Knees. —Emiliano Zapata
The Rise and Fall of the Caliphate of ISIS 2011 - 2019 Syria, Iraq, and Libya
This quote attributed to Emiliano Zapata during the Mexican Revolution, to Dolores IbaÌrurri during the Spanish Civil War and to Che Guevara during the Cuban Revolution never ceases to amaze me.

On one of my recent trips to a Syrian prison, I met again with two of the alleged members of "The Beatles" (the quartet of executioners and guards of 21 Western hostages, including myself together with Spanish journalists Javier Espinosa and Marc Marginedas), who became a media sensation because of the murders of James Foley, Steven Sotloff, Peter Kassig, David Haines, Alan Henning and Sergei Gorbunov. Sergei, who died in anonymity, was "lucky" enough to be killed with a bullet to the head instead of being decapitated alive. It speaks volumes that two of the men who were supposed to be elite soldiers, who have 72 virgins and many other pleasures awaiting them in paradise, try to stay alive at any cost and do not have the courage to die in the manner they supposedly decided "to live": without fear of death.

Now that they have lost their three capitals and all the territory they had managed to hold onto in the area of Deir ez-Zor, with the fall of the last enclave in Al-Baghouz they have lost the legitimacy to call themselves Islamic State. How ISIS will evolve is an enigma for security forces, for analysts, for the civilian population it victimizes and probably for the militants themselves.

This work is the result of nine years chasing the Islamic State. It is the rise and fall of it, in the three countries that formed it: Syria, Iraq and Libya and in the main battles for its three capitals in Raqqa, Mosul and Sirte, in addition to others that marked the beginning of the end as that of Kobane or Sinjar and the final battle of Baghouz in March of the same year. ISIS sowed death and destruction,resulting in hundreds of thousands of victims. This is his story 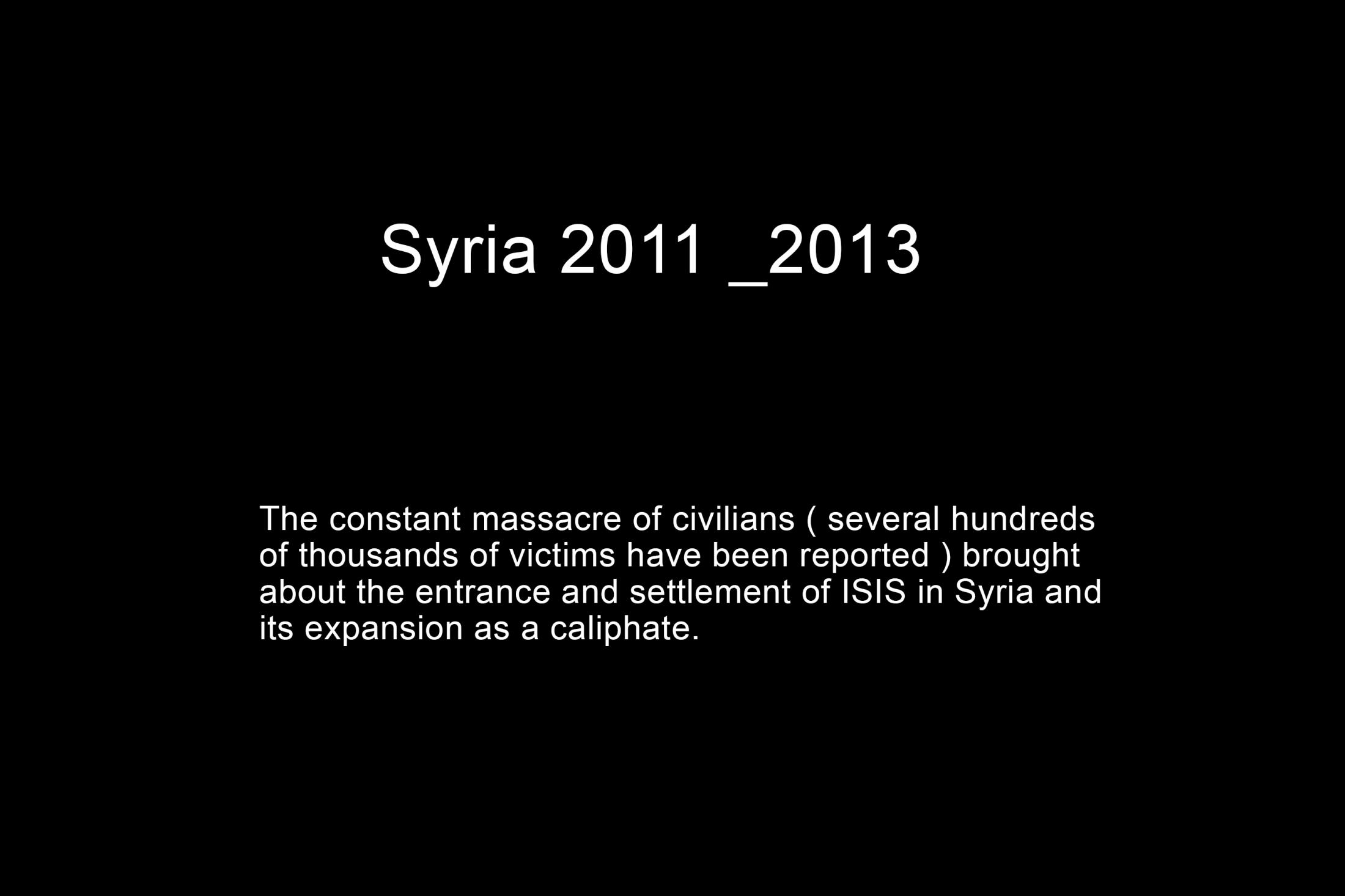 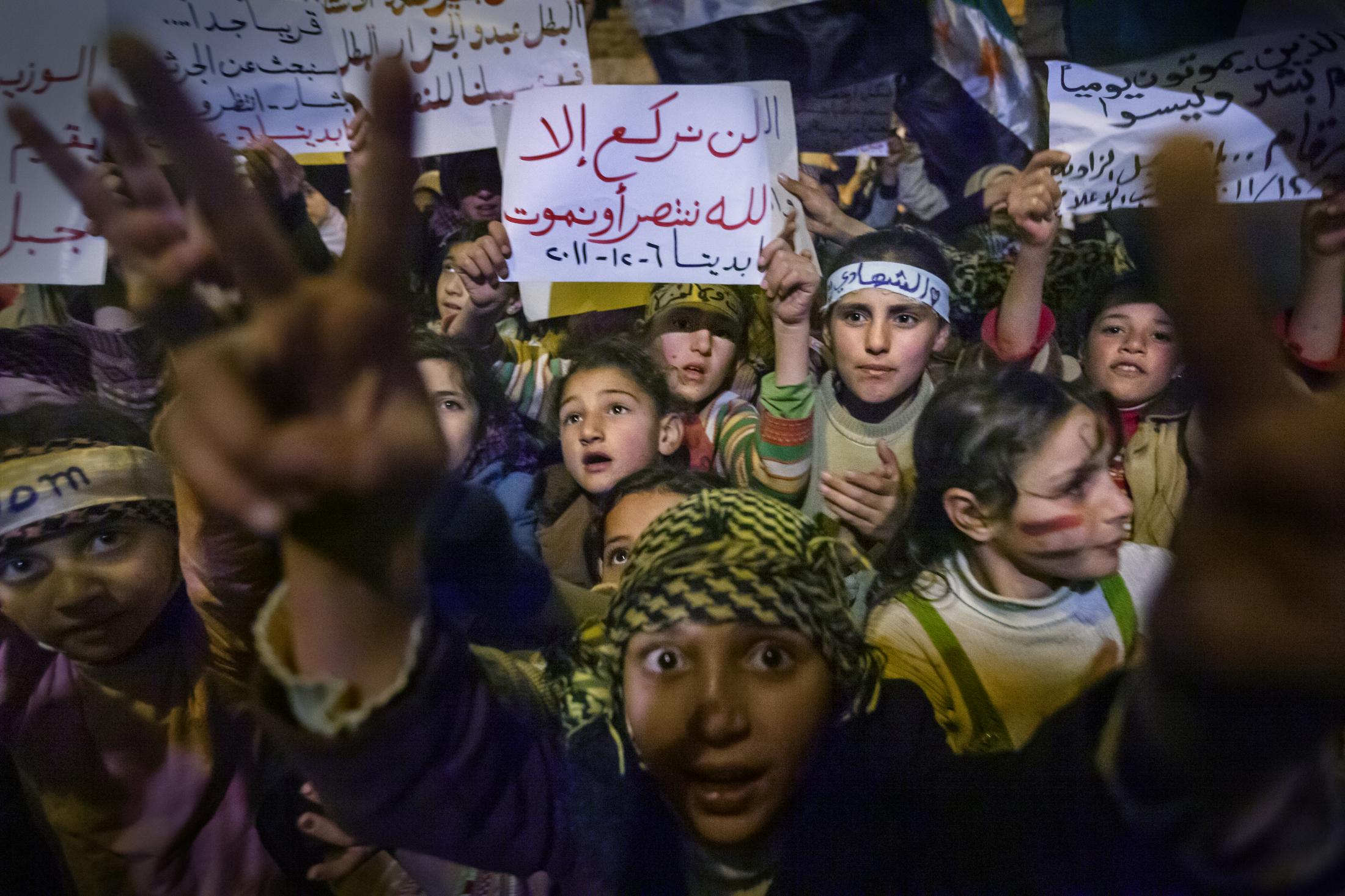 Captions
At the first protests, in this case in Jawal Zawiya, only children could be photographed because they couldnâ€™t be identified. Adults were afraid of the regimeâ€™s fearsome mujarabat ( intelligence services ) . The signs wee in Arabic , as between 2011 and the middle of 2012 , there were practically no Western journalists in the country (Syria, 2011) 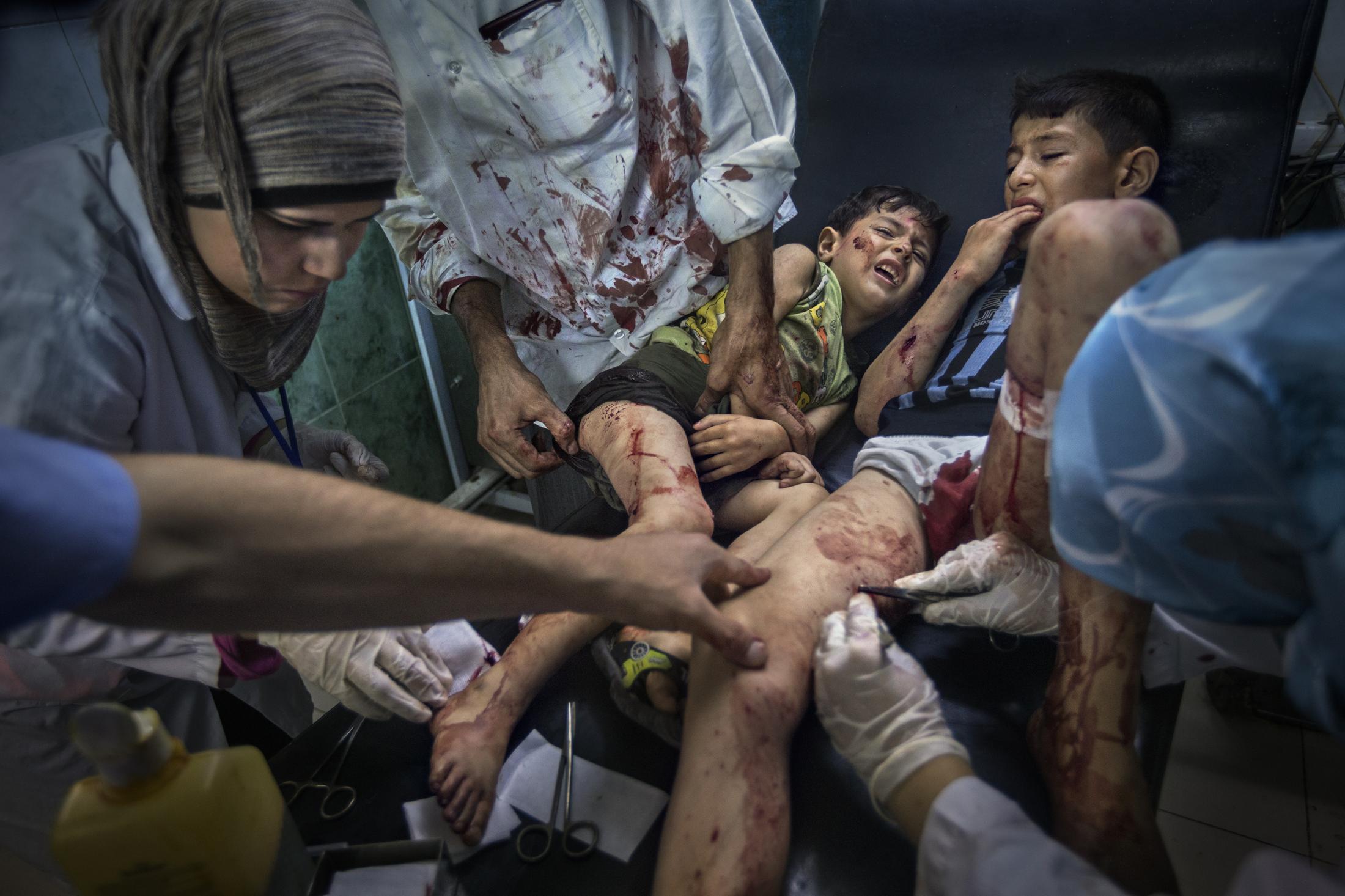 Captions
The city of Aleppo suffered the worst recorded attack against civilians, on August 16. Assadâ€™s army bombed three bakeries where people stood in line to buy bread in the early morning hours as well as several houses. As a result, they killed 50 people and left 197 wounded. Many of the injured and dead were children.
Two brothers are being treated for shrapnel wounds at Dar Al Shifa Hospital between Al-Shaar and Tariq al-Bab districts (Syria, 2012) 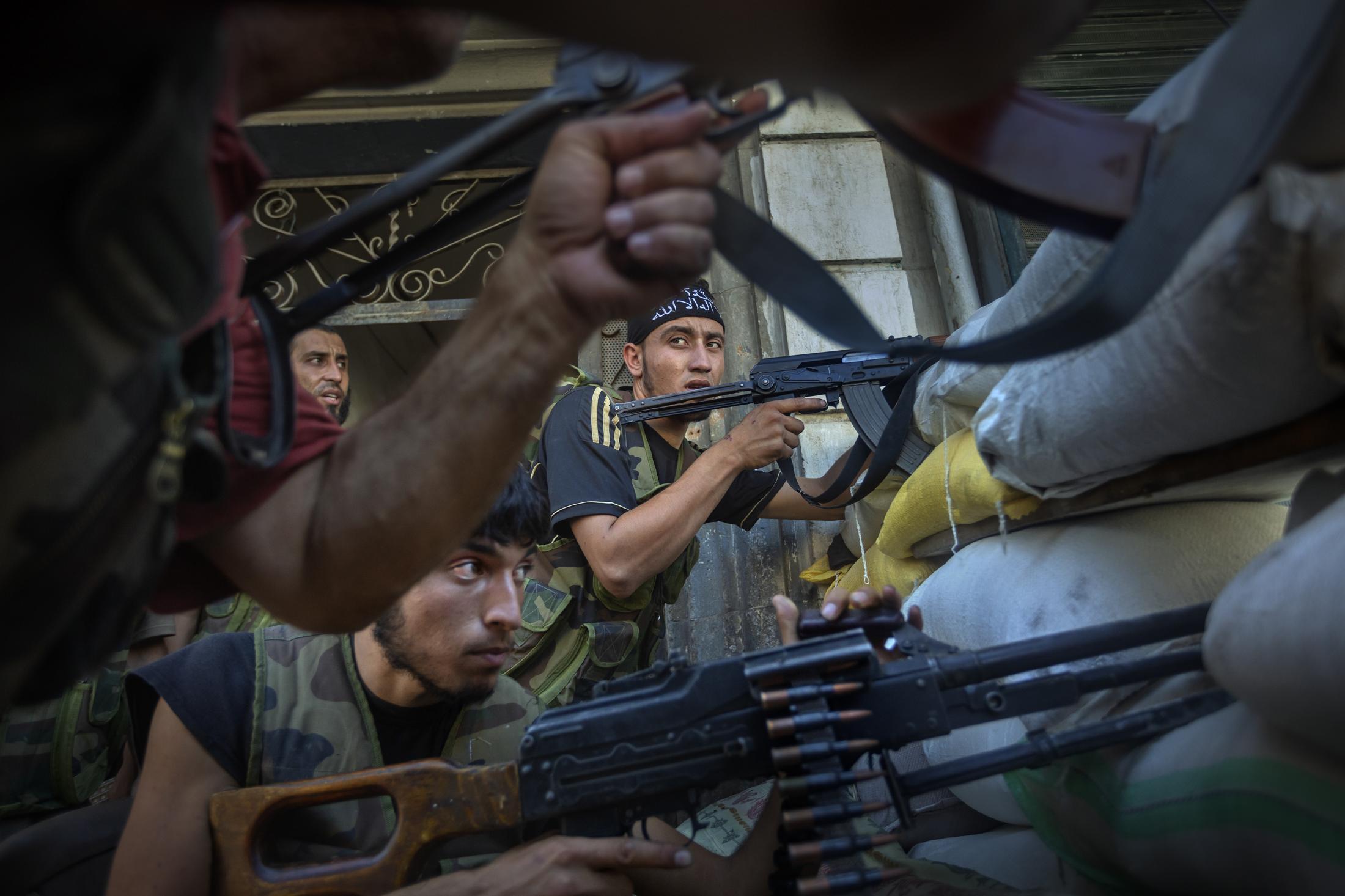 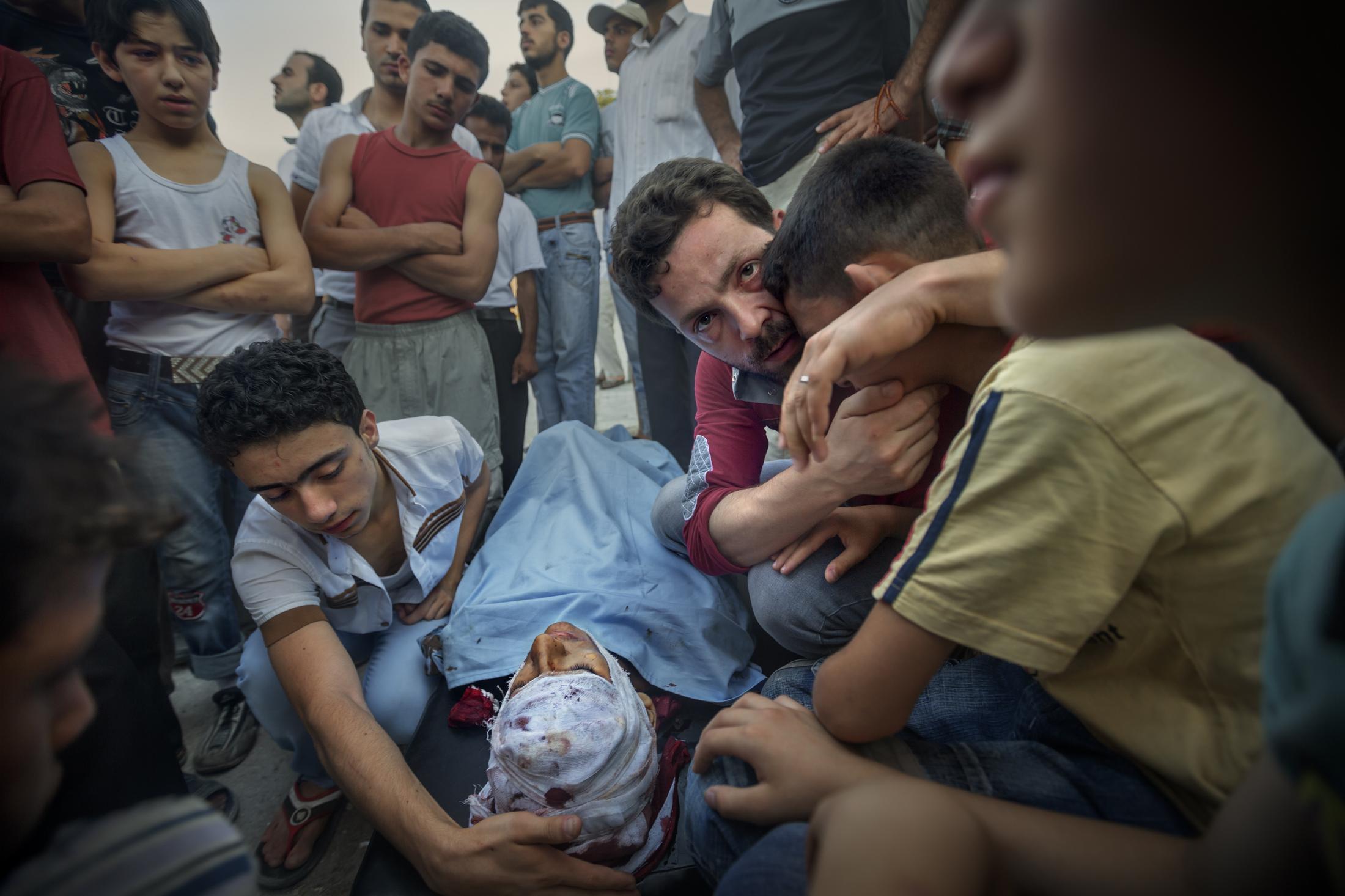 Captions
A father comforts his son over the death of his brother, in the besieged martyr city of Aleppo, at the cemetery in Karm Al Jabal (Syria, 2012) 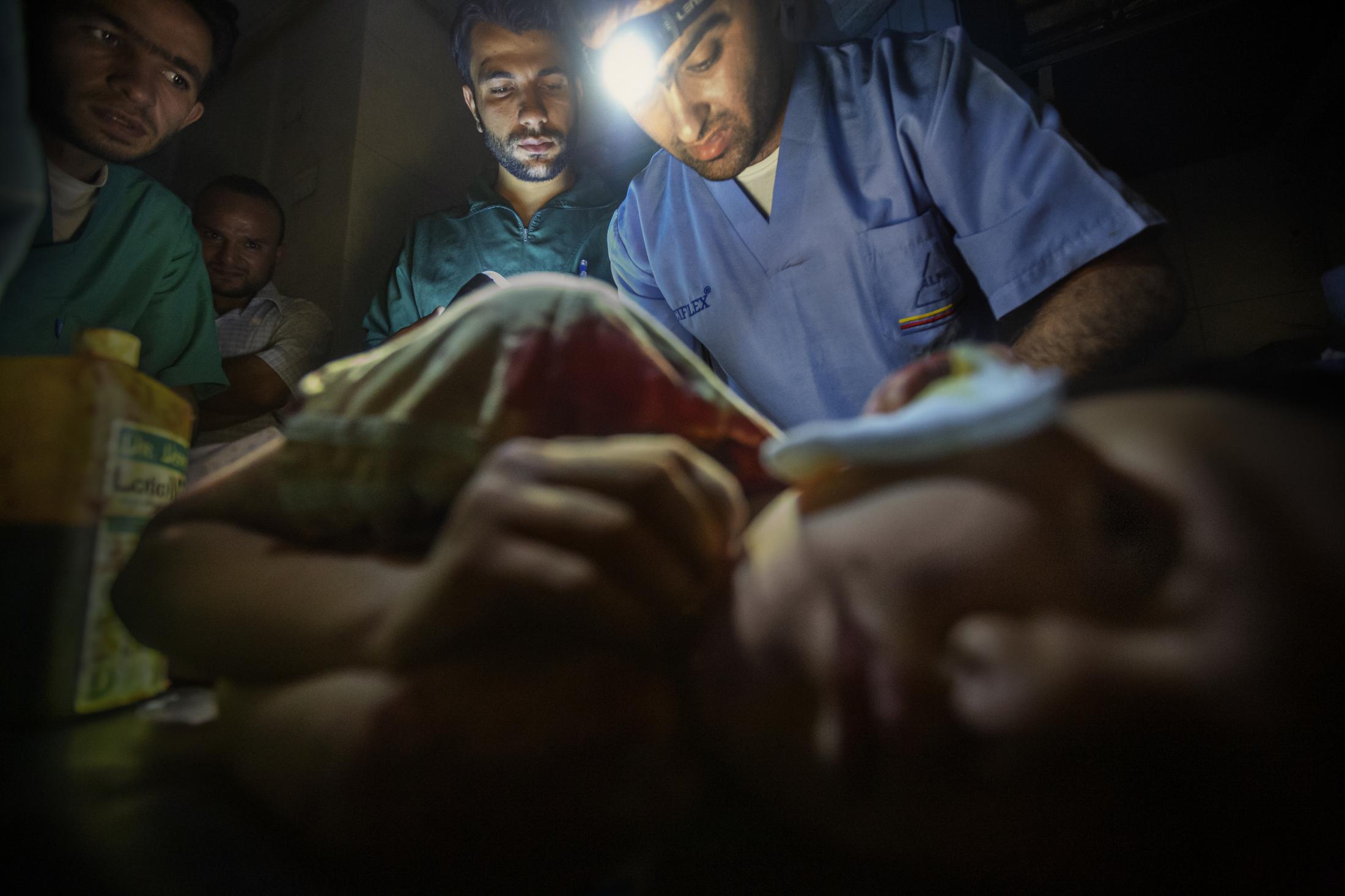 Captions
Ahmed, a 5-year-old boy, has lost an ear and sustained severe head injuries caused by the impact of shrapnel from shelling; he does not yet know that  his father was killed in the same attack . Here he is being treated by a medical worker wearing a head lamp in Dar Al Shifa Hos pital , which lost autonomous power supply after the bombing by Assadâ€™s regime (Syria, 2012) 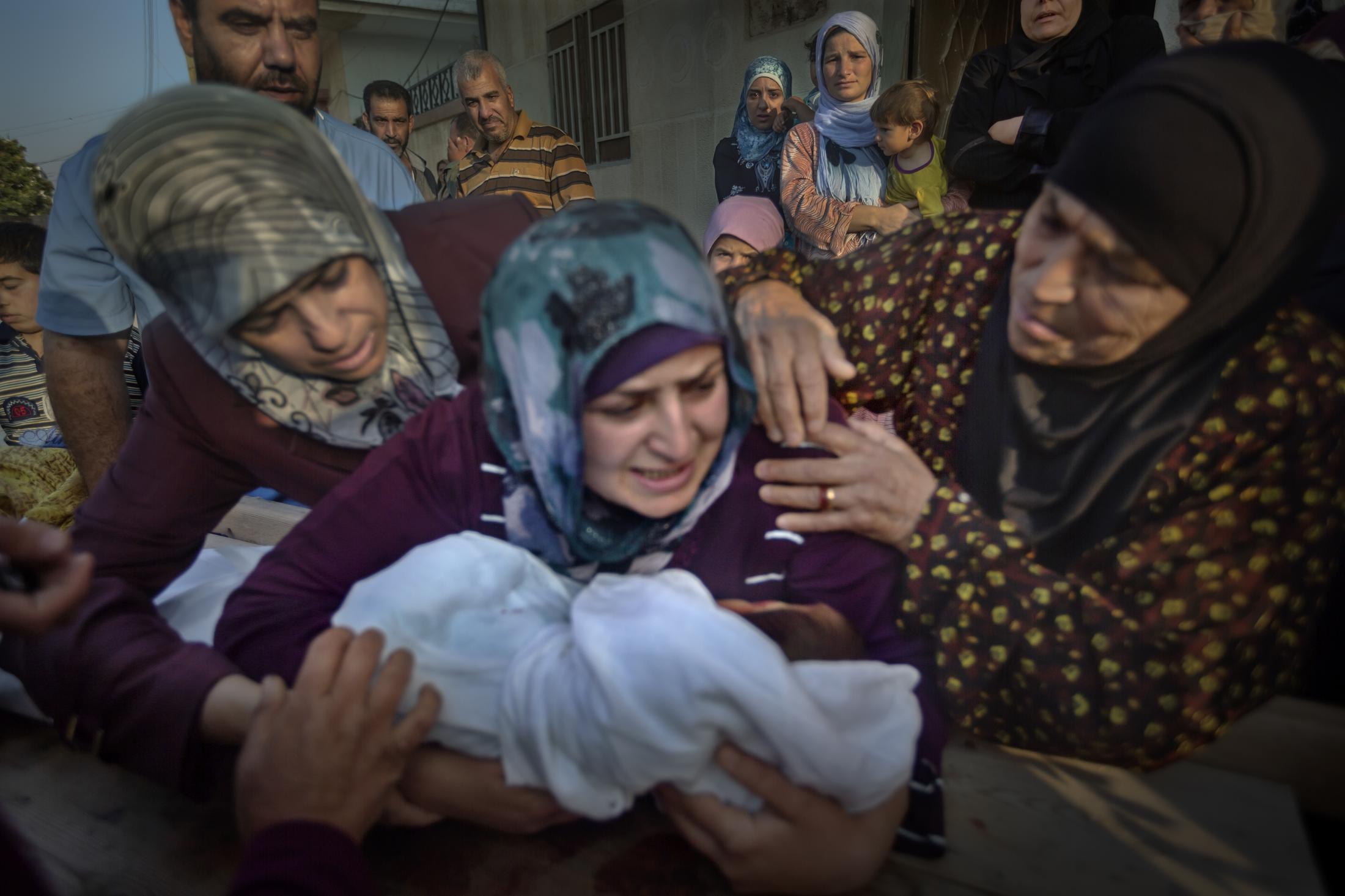 Captions
A sniper killed a 5-year-old boy named Yazan Gassan Rezk with a single shot to the head, at an access point to the city of Al Qasir. His mother cries as she clutches her sonâ€™s corpse before the funeral. That same day, 6 people were killed and 37 wounded by bombings in the city surrounded by forces loyal
to Bashar al Assad while helicopters circled overhead. This city was a rebel stronghold in Homs province (Syria, 2012) 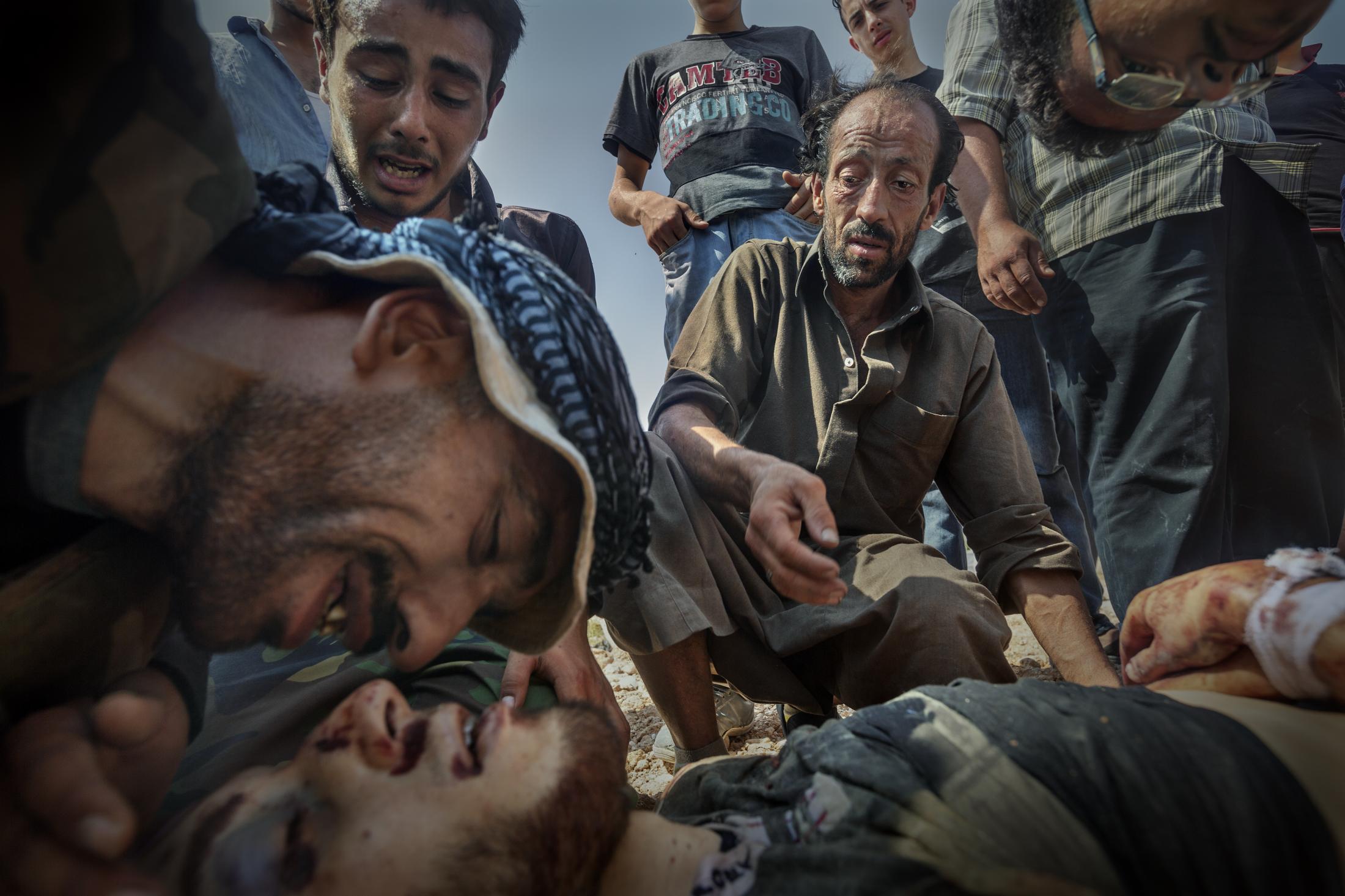 Captions
A father cries over his son killed by a government helicopter, at a cemetery on the outskirts of the city. The victimâ€™s brother cries with him. He was trying to save a child wounded by a helicopter and the helicopter fired, killing them both. Aleppo (Syria, 2012) 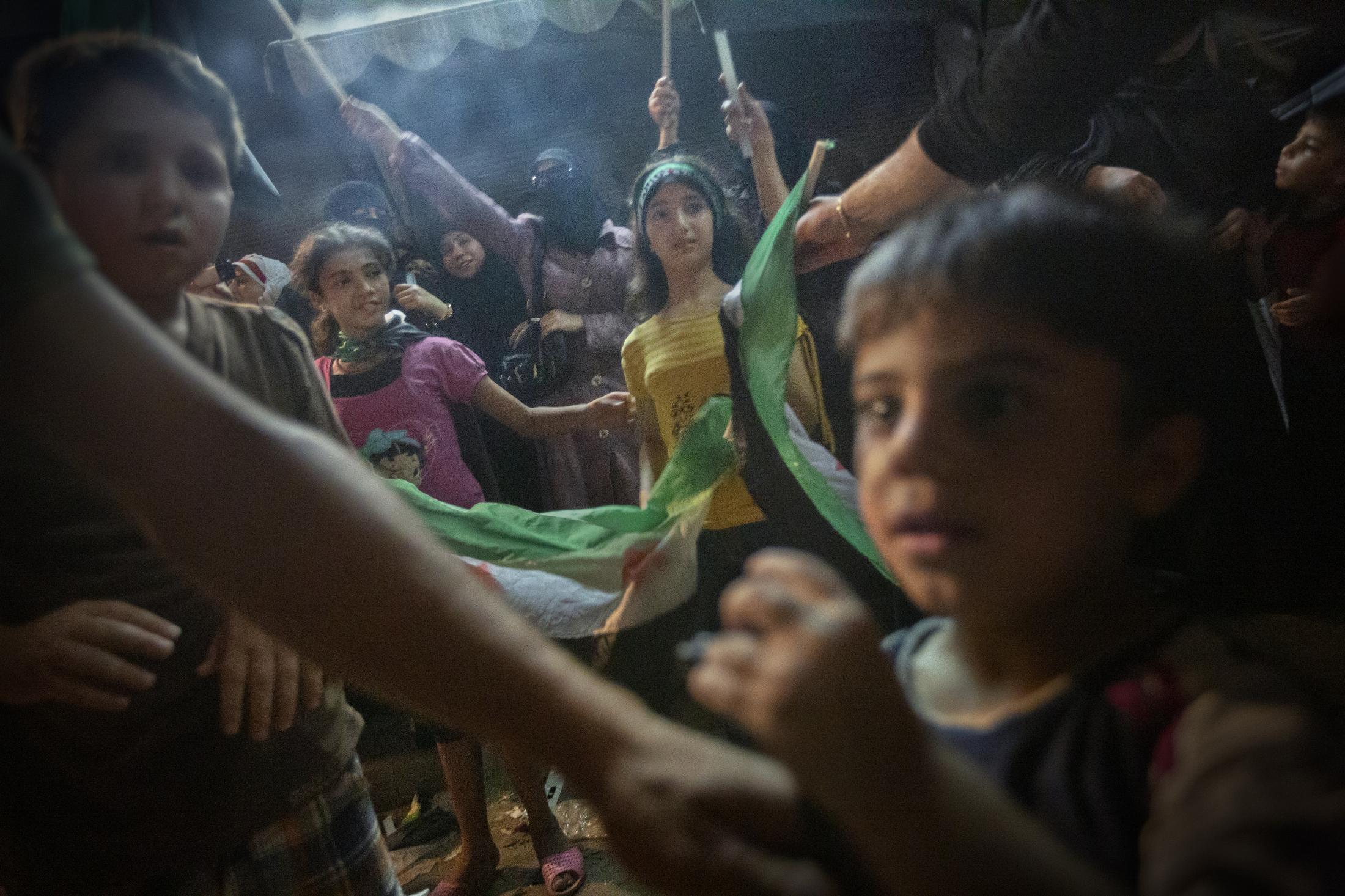 Captions
Women and children at a protest against Assad and the killing of civilians.This was at night because of Ramadan (July 19-August 18). Aleppo (Syria, 2012) 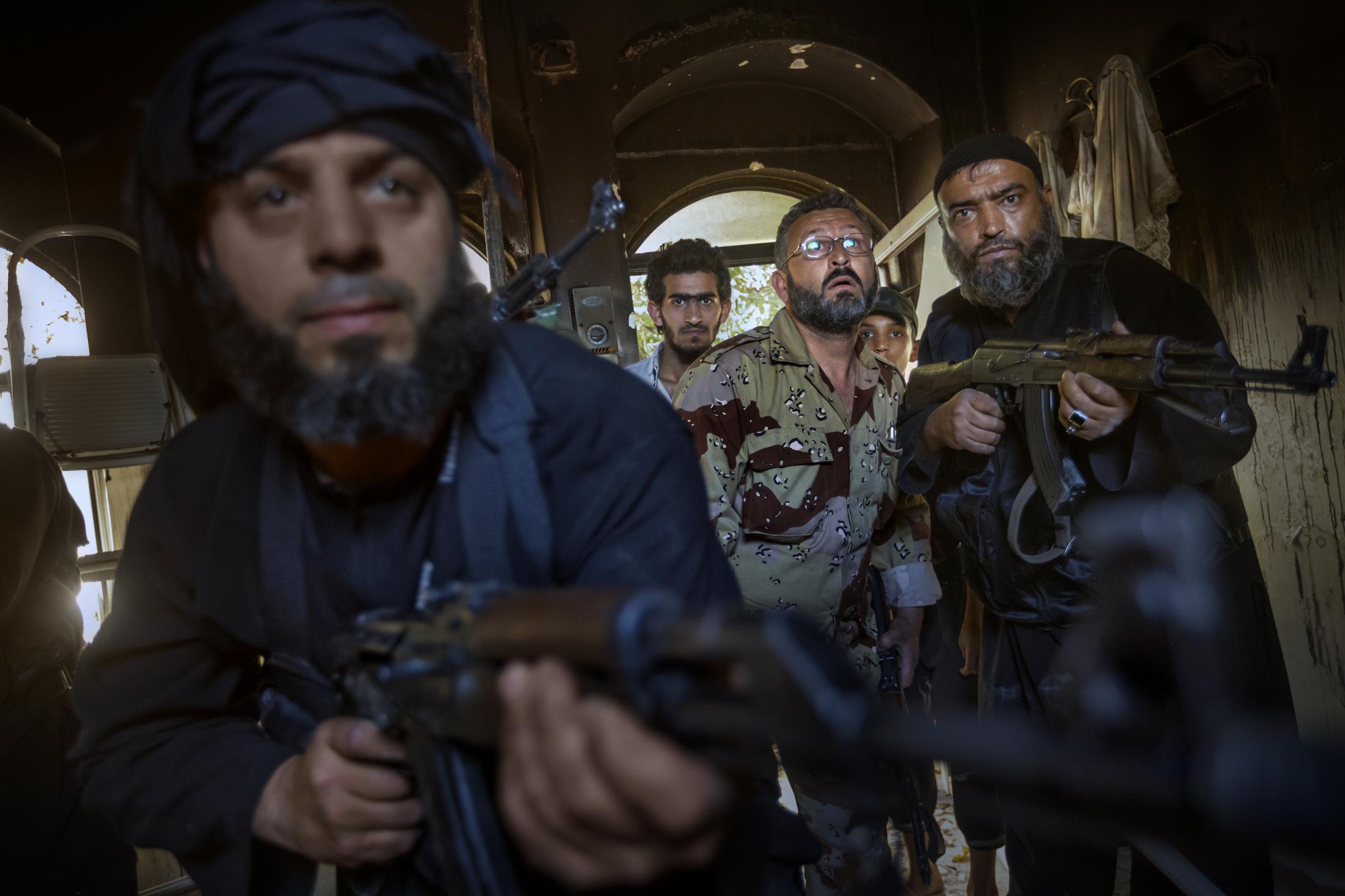 Captions
The first jihadists aligned with ISIS, along with soldiers of the beleaguered Free Syrian Army (FSA), in Aleppoâ€™s Old City (Syria, 2012) 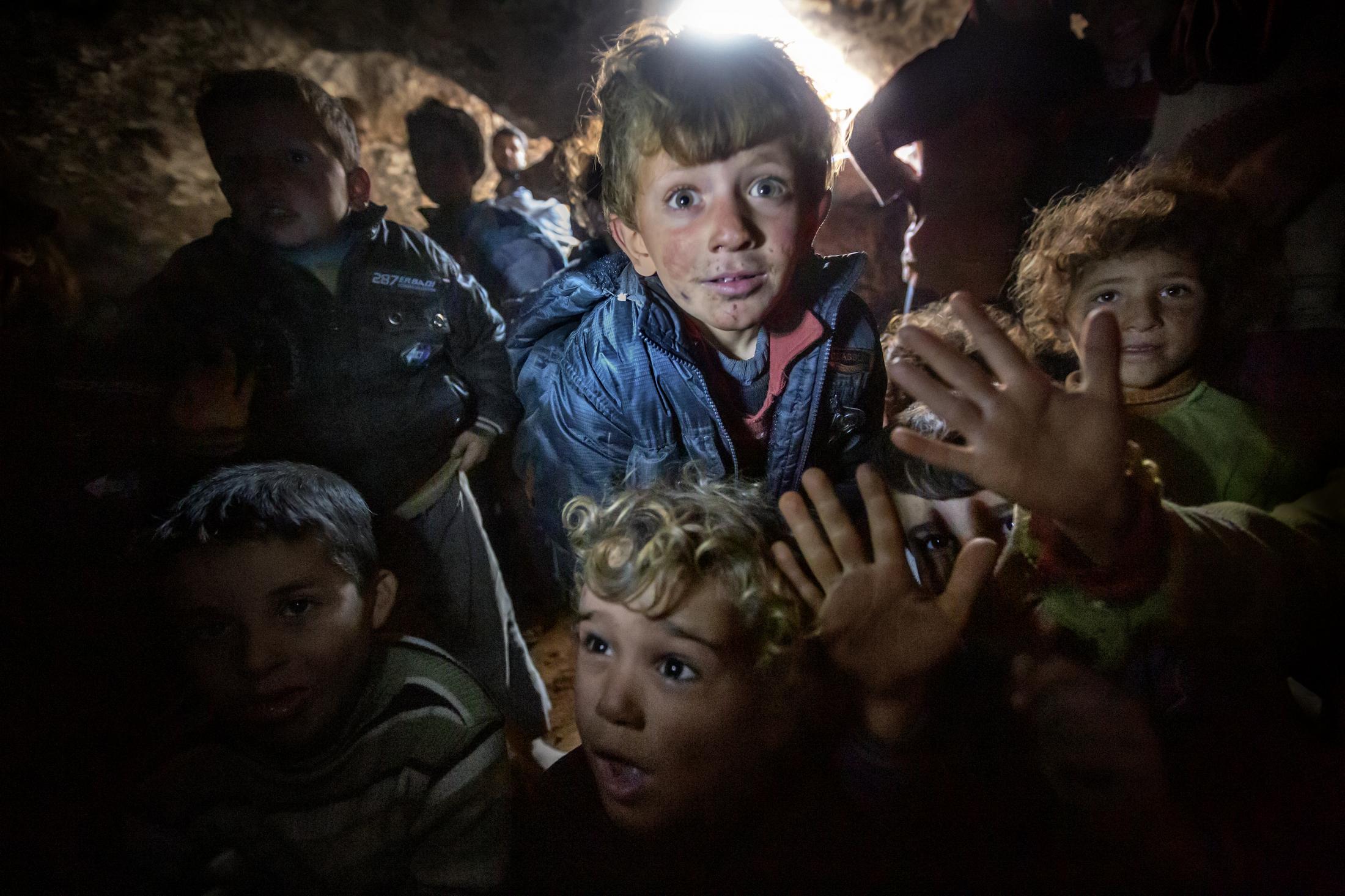 Captions
Of the nearly 400 people who had taken refuge inside the caves in Idlib province, more than half were children. The people asked that their location not be revealed because they were afraid the army might bomb them. In fact, the front lines were close by and sometimes the areas around the caves were shelled. The refugees did not have enough food, medicine or adequate winter clothing, but at least the children could attend classes taught by volunteers (Syria, 2013) 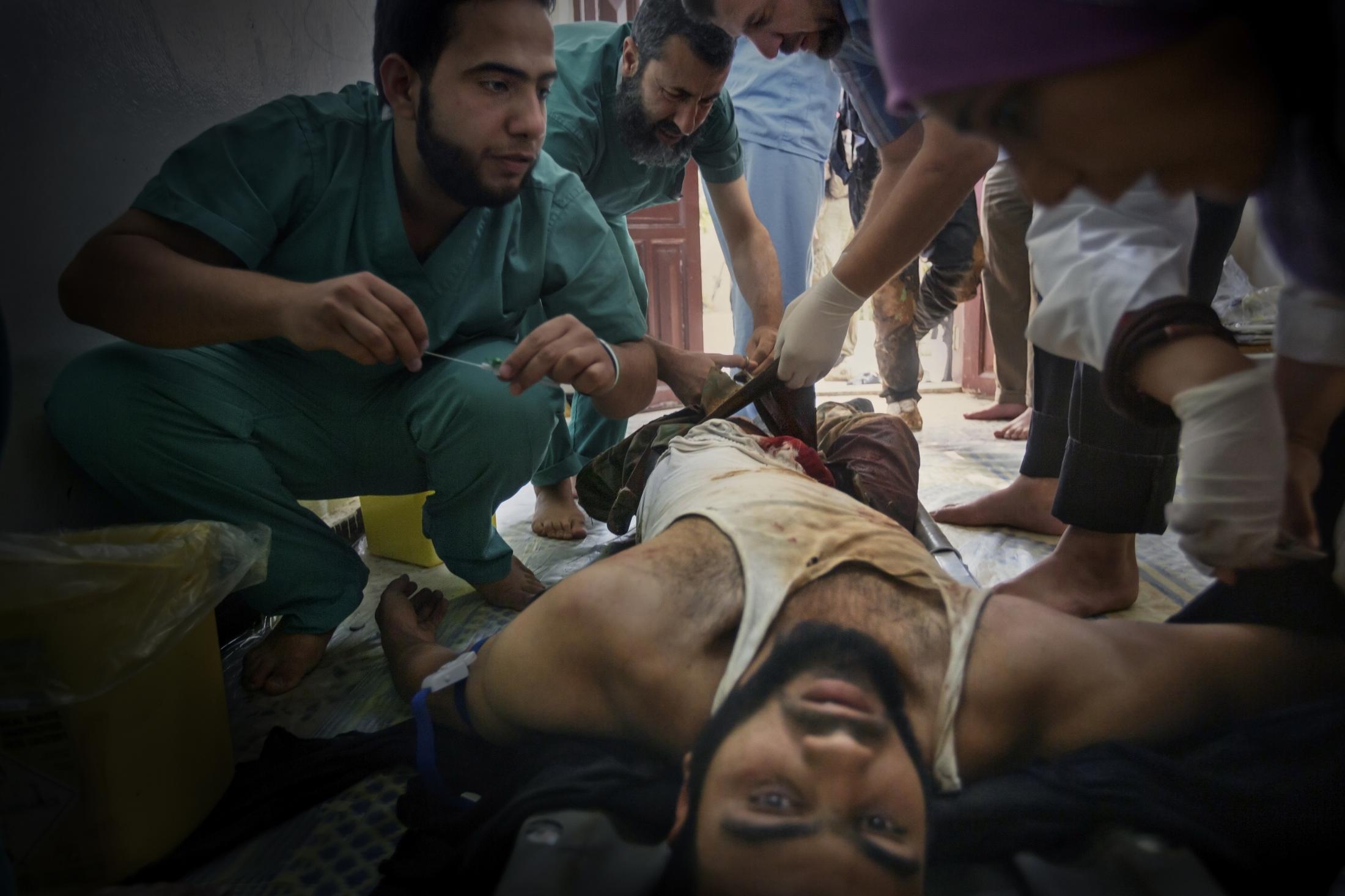 Captions
A man is treated for serious injuries from a mortar attack on the floor at the entrance to a makeshift hospital. The same day, there were 27 injured and 5 dead in Al Qasir Hospital (Homs province), where only one of the 20 staff members was a doctor (Syria, 2012) 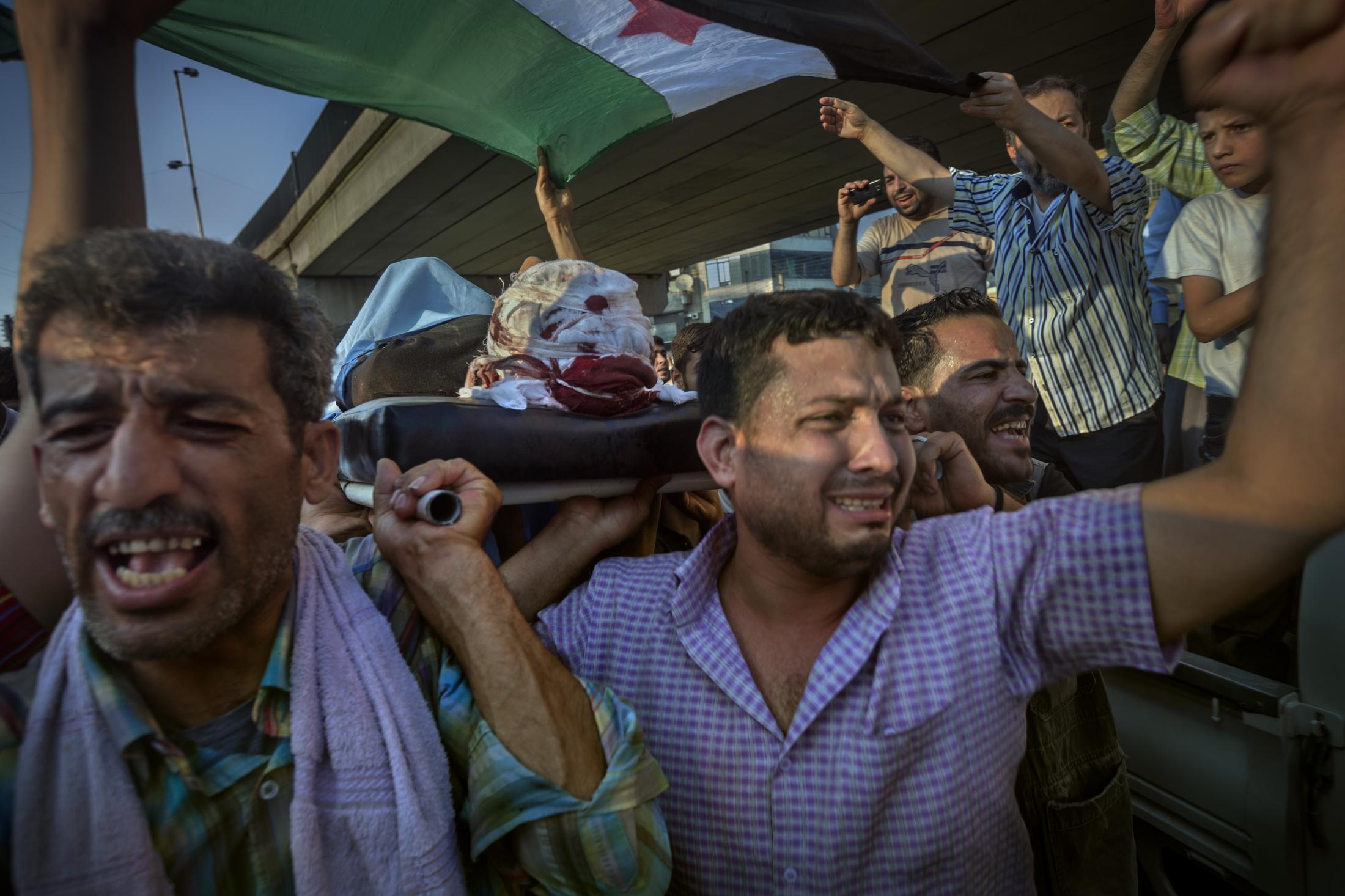 Captions
A father (with his arm raised) in the funeral procession of his son, killed just a few hours earlier close to the cemetery in Karm Al Jabal (Syria, 2012) 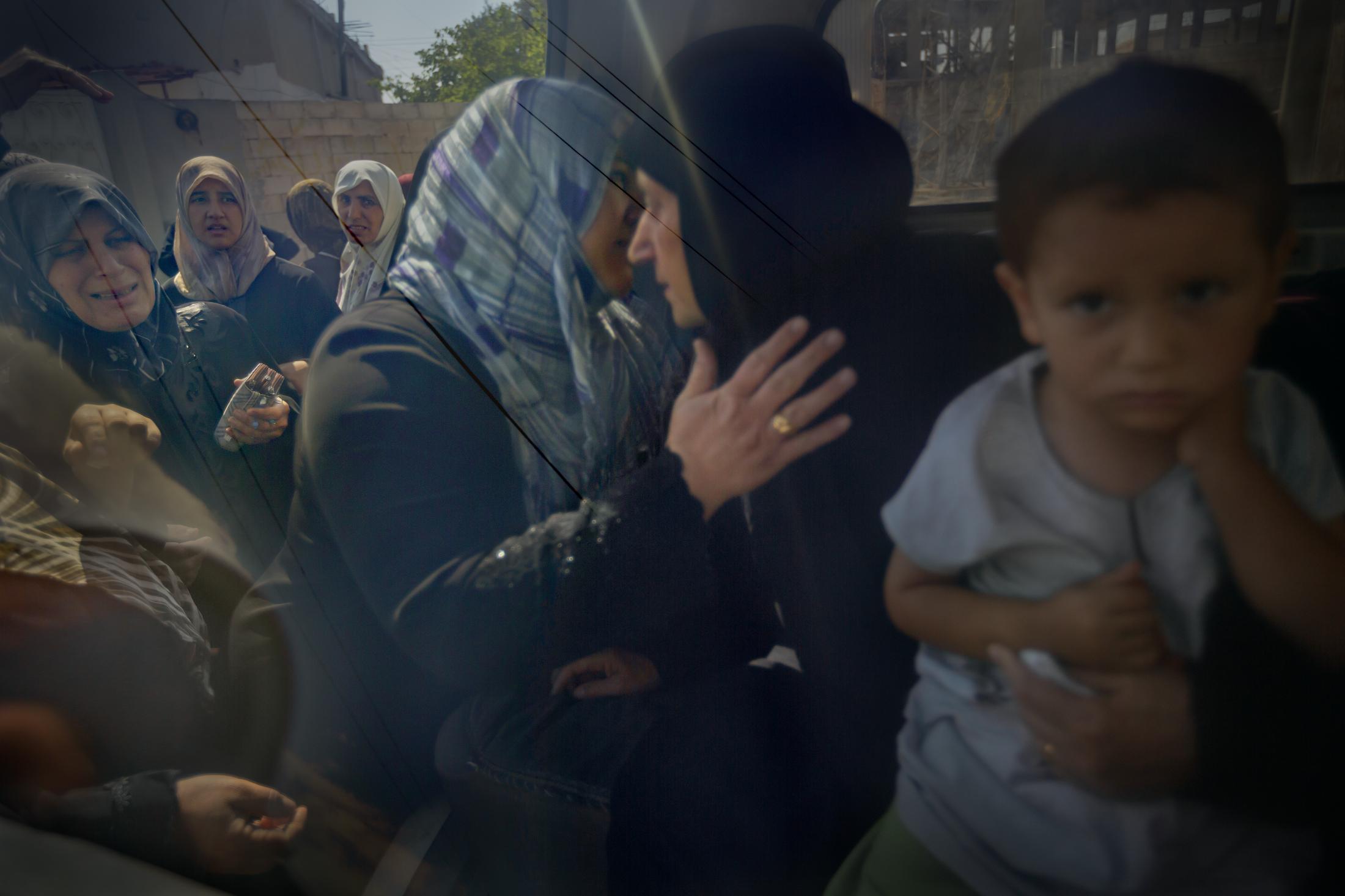 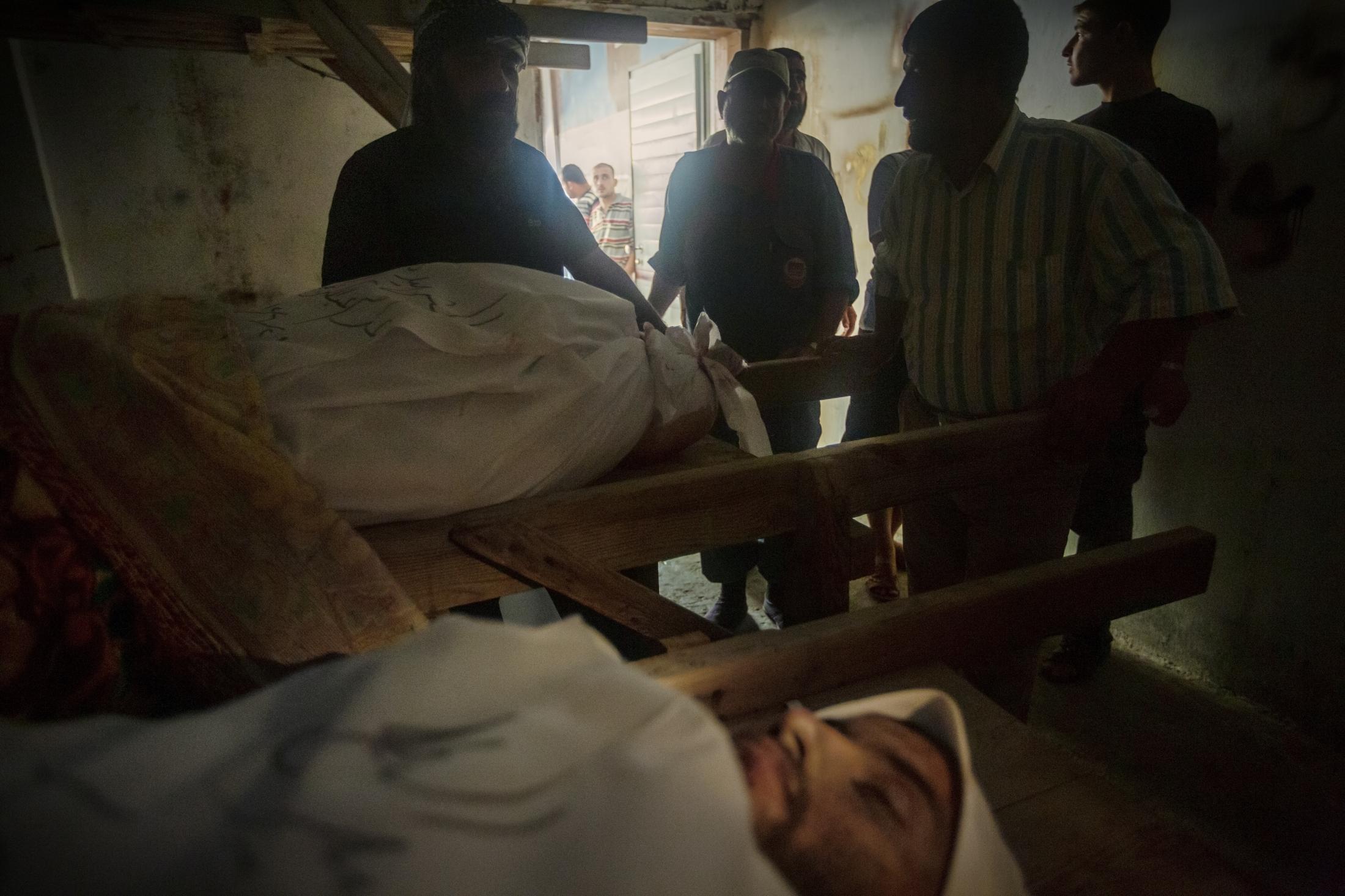 Captions
In Al Qasir , where there is now hardly enough time to bury the dead because the city i s c o n s t a n t l y being shelled , bodies are amassed in private homes used as temporary burial chambers waiting to be interred  at a later date ( Syria 2012 ) 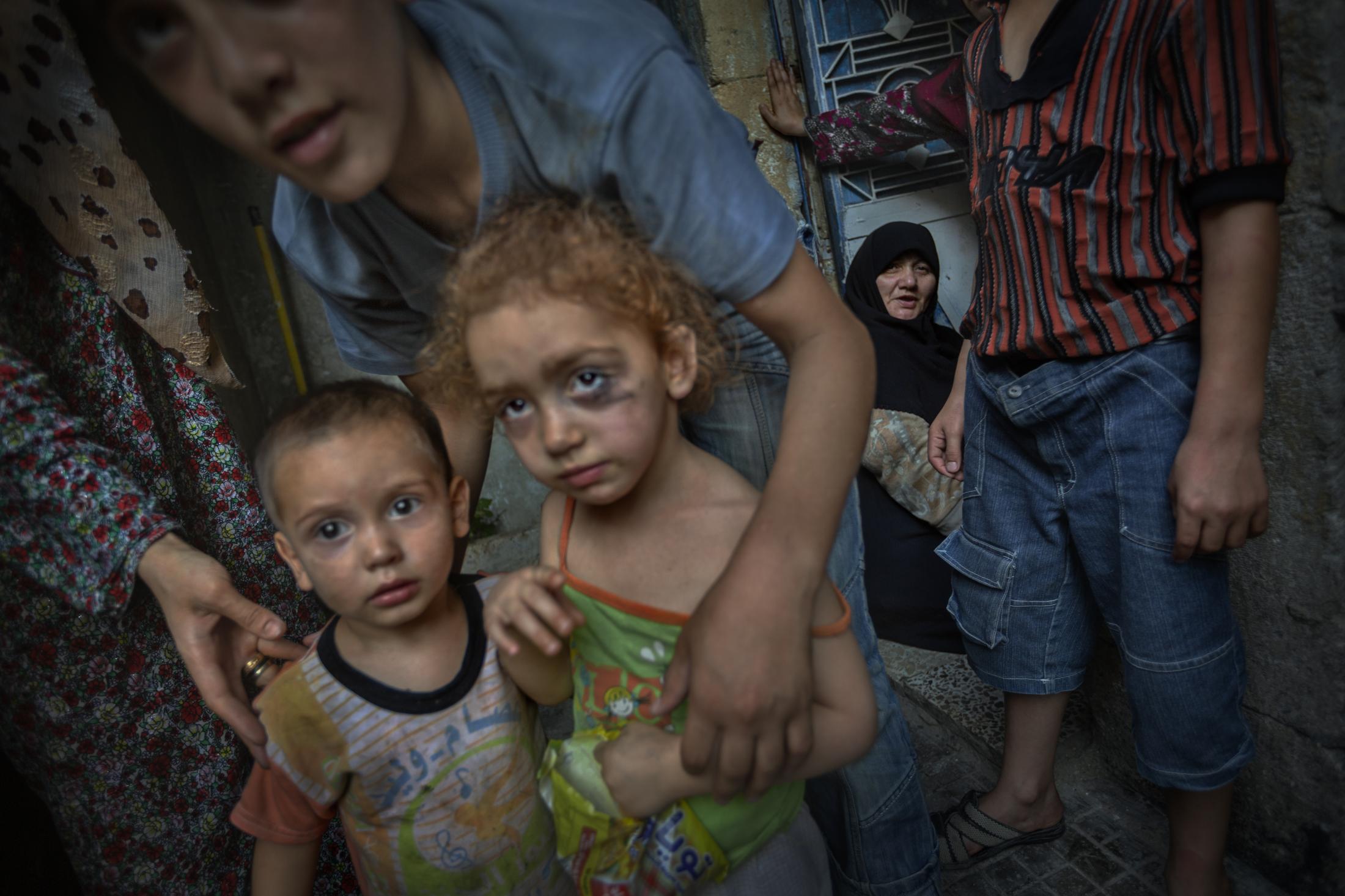 Captions
A girl with here with her eye makeup ruined by tears brought on by fear of the bombings ( in this case from  a helicopter ). Aleppo ( Syria 2012 ) 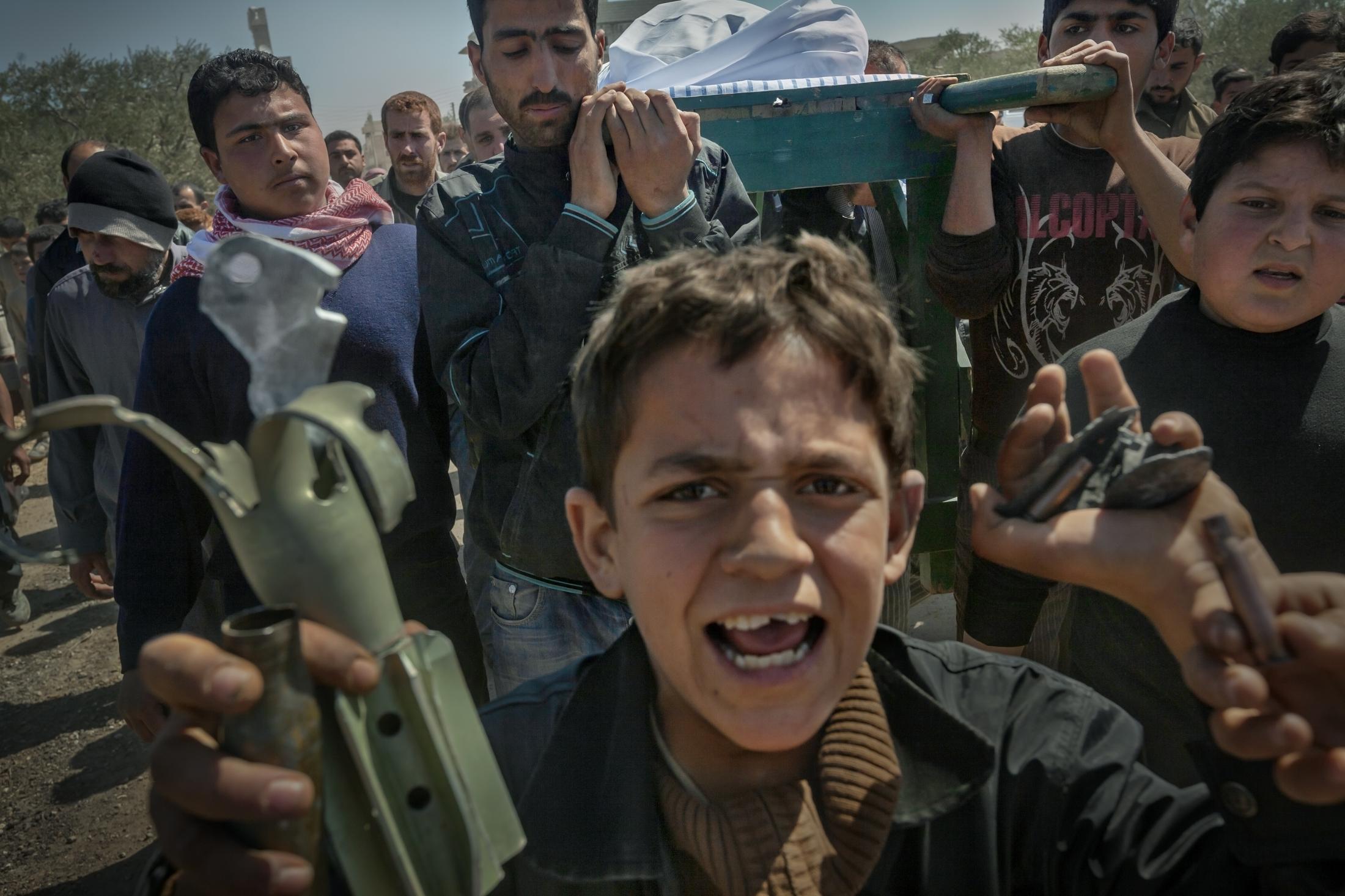 Captions
A boy hold s fragments of shrapnel shells from bombings by Assad â€™ s troops . Meanwhile , a funeral procession with the body of one of the victims killed in this attack follows him .Sermen ,Idlib province (Syria,2012) 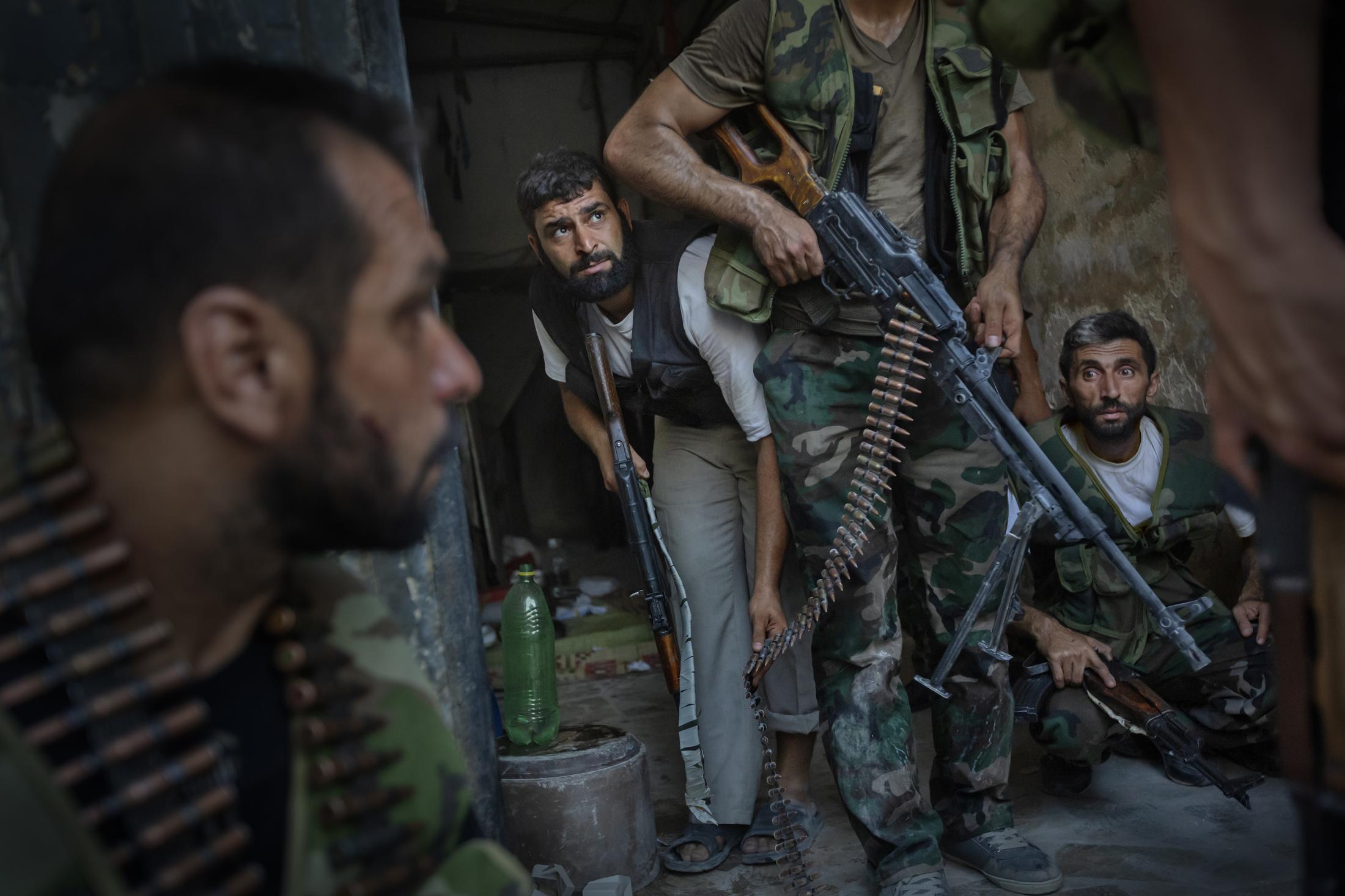 Captions
Free Syrian Army (FSA) soldiers during intense fighting against Assadâ€™s troops over the taking of the police station in the Old City of Aleppo. As a helicopter bombs the area, a soldier looks s up ( Syria , 2012 ) 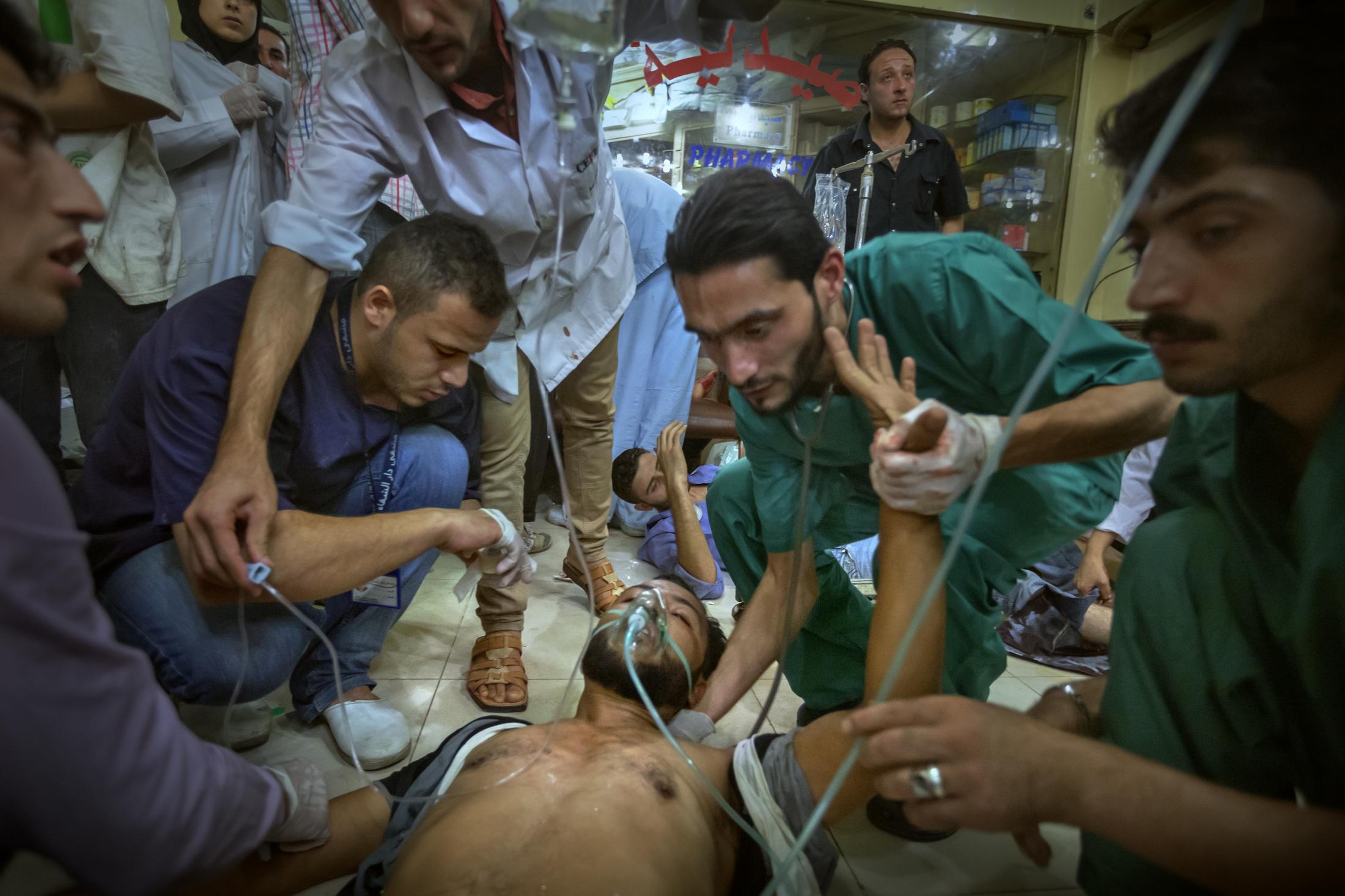 Captions
The floor at the entrance to Dar Al Shifa Hospital is used as a provisional emergency room. The upper floors had already been destroyed by the bombings and were unusable . There were only 5 doctors for around 400,000 in habitants . One was Yasser Darwish, who had remained in the city since the war began in Aleppo, in July . Then I SIS arrived and he was put on a list of people most sought after to be assassinated and had to leave ( Syria , 2012 ) 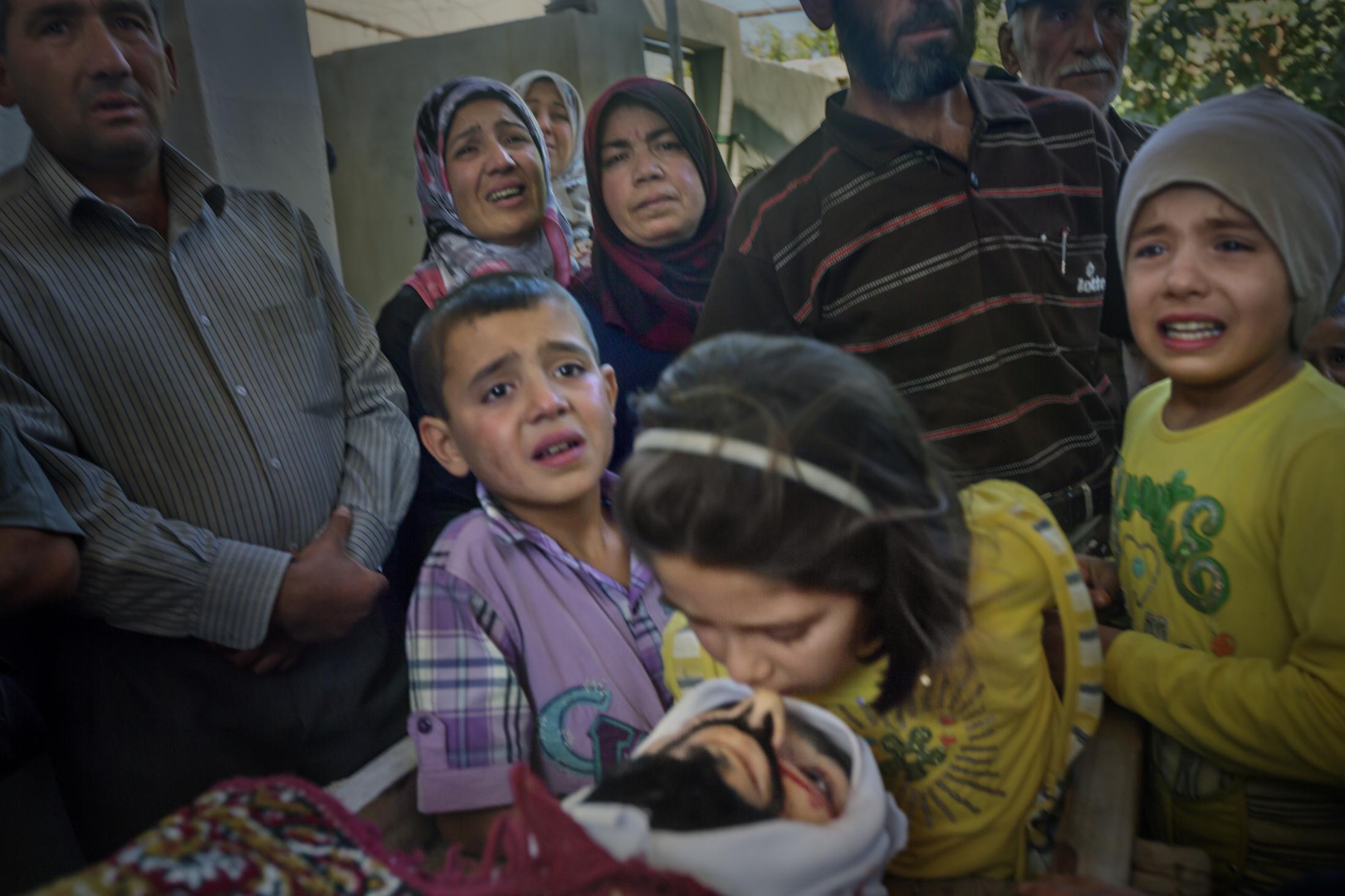 Captions
A 5 - year - old girl kisses the corpse of her father , Khaled Kasem Aleiter , killed today by a mortar shell that fell while he was crossing the street in the city of Al Qasir. His other two children and his wife cry over their loss (Syria, 2012) 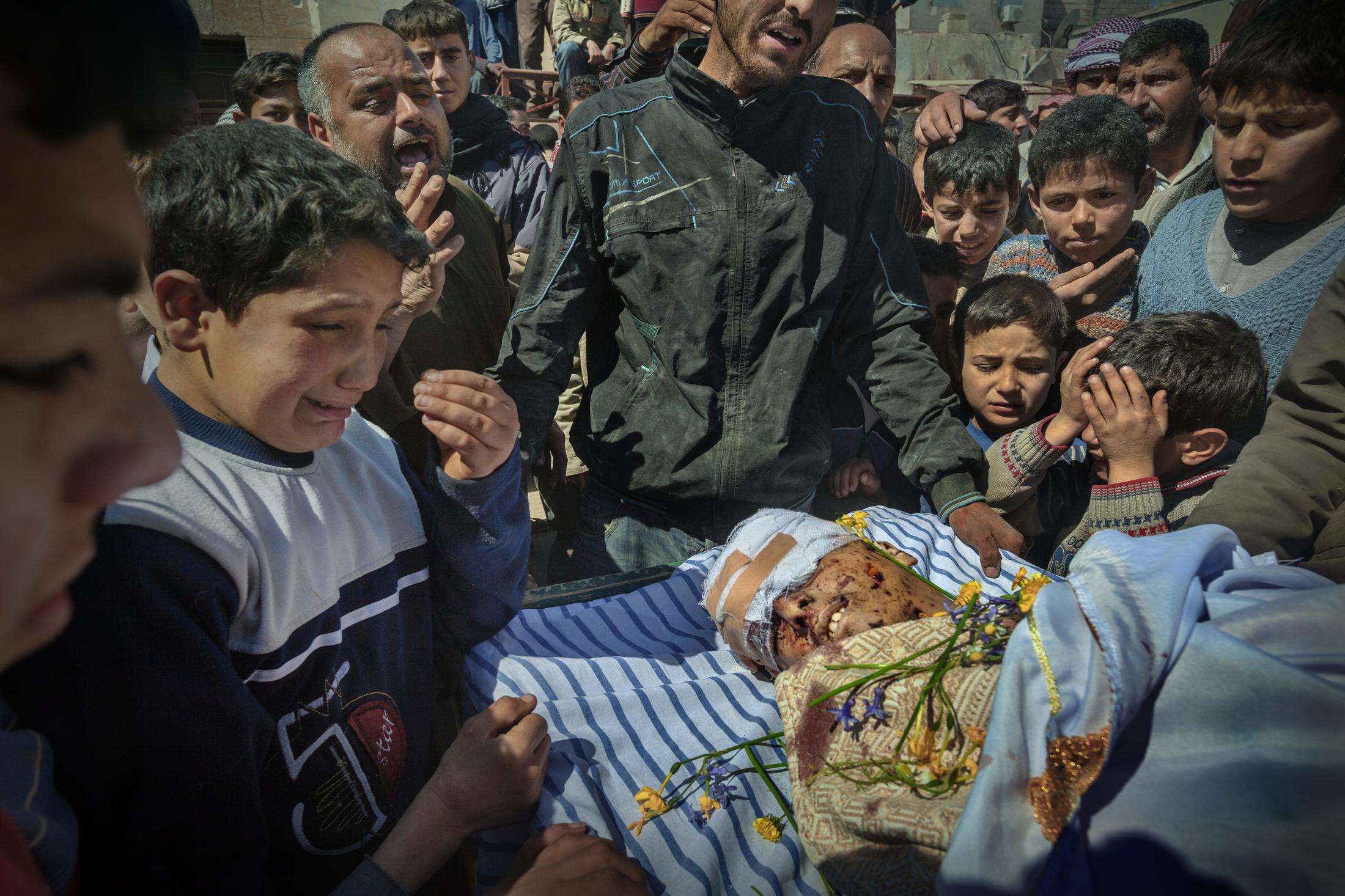 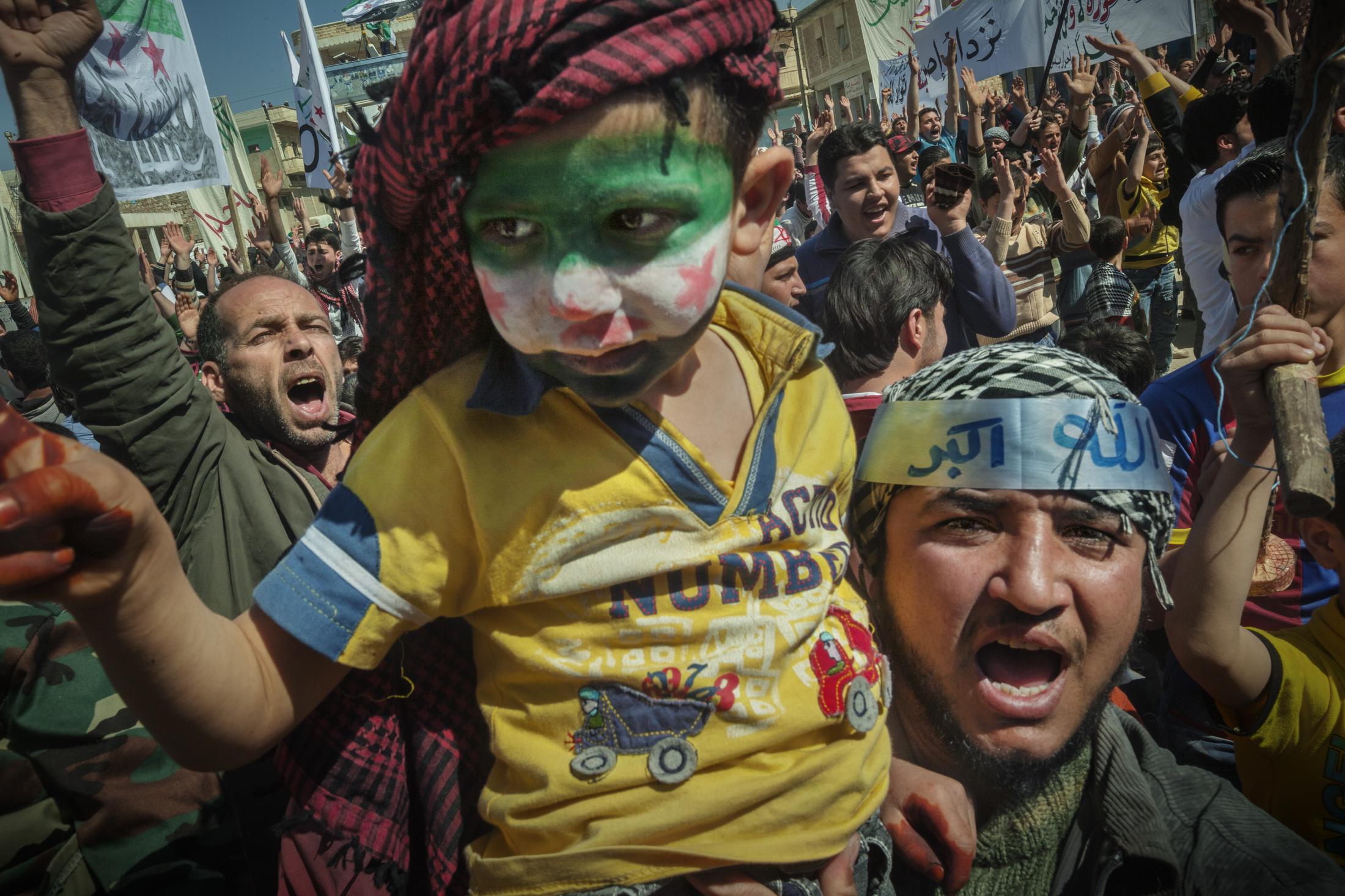 Captions
Protest in Binnish ( Idlib province ) after the attack the previous day against the civilian population . Only around 1,000 people remain in the city ( normally 6,000 live there ) . The rest left Binnish over fear of another attack ( Syria , 2012 )

A freelance photographer for over 19 years. Specializing in conflict zones and humanitarian crises,